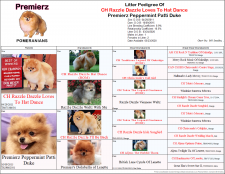 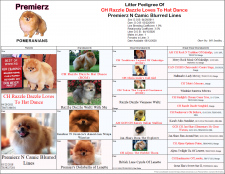 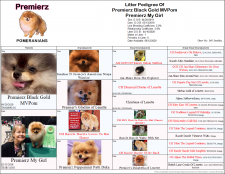 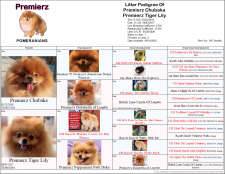 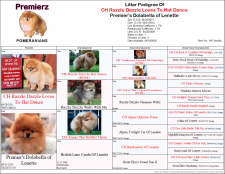 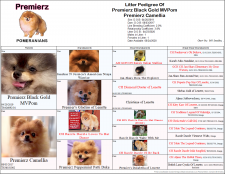 All of our puppies are descendants of a long bloodline of champions and are the best-of-the-best for structure and in appearance. That is one of the reasons our puppies are in such high demand.

We only compete in AKC sanctioned dog shows in Dog Conformation as opposed to Dog Agility, which is a sport in which a handler directs a dog through an obstacle course. Pomeranians can compete in ‘Agility’, but they mostly compete in Conformation, which refers solely to the externally visible details of a dog's structure and appearance as defined by the AKC written Breed Standard.

On the above pedigrees you will see 'CH' that preceeds the dogs name and are highlighted in red.  Those are Champions.

Champion: CH
Dogs must acquire 15 points, including 2 majors, won under different judges, and at least one point under a third different judge.  Dogs can earn from one to five points at a show. A win of three, four or five points is called a major and are determined by a complex formula based on the number of other dogs you're competing against.

Grand Champion: GCH
Completion of the title requires all of the following:
• Twenty five Grand Championship points
• Three majors won under three different judges
• At least one or more points won under a fourth judge
• Must have defeated at least one other AKC Champion of Record at three shows

Count the number of dogs competing in the regular classes of your dog’s sex - novice, puppy, bred-by-exhibitor, American Bred, and Open classes. Remember to include your dog in the total! Don’t count any dogs that are absent (no shows), disqualified, dismissed, excused, or have awards withheld. These dogs do not count in computing the number of dogs competing for that show. If you did not keep up with the total number of dogs in the regular classes, ask the ring steward or check the posted copies of the judge's book for a count of total dogs before you leave the show.

Tip: Check the posted copies of the judges’ book before you leave the show to make certain your dog was marked as the winner. Mistakes do happen! Also, verify that your dog’s AKC registration number is correct in the catalog. If it is not correct, let the superintendent know before you leave the show. In both cases, it’s easier to make the correction on the day of the show rather than later.

Compare the number of dogs competing that day to the schedule of points for your dog’s breed and sex located in the show catalog. The schedule is usually listed with the entries for each breed or at the front of the catalog.

If the number of dogs does not match exactly with those listed in the catalog, choose the number of points assigned to the next lowest number.

An example of a point schedule is listed below:

The American Kennel Club requires a dog to obtain a total of 15 points with two major wins (a major win is worth three points or higher) to become a champion. The majors must be won under different judges and at least one other judge must award some of the remaining points - so you need to win under at least three different judges.

Most competitive events held under AKC rules are dog shows, where the accent is on conformation. After being examined by a judge, dogs are placed according to how well (in the judge's opinion) they measure up to their breed standard.

To be eligible to enter, an AKC-registered dog must be at least six months old on the day of the show and be of a breed for which classes are offered in the premium list (the list of breeds being shown). Dogs that are spayed or neutered are only eligible to be shown in stud dog and brood bitch classes. Dogs with disqualifying faults as described in their breed standard are ineligible.

Most show dogs are competing for points toward their championship. To become an official AKC champion of record, a dog must earn a total of 15 points, which would include 2 major wins under 2 different judges. These points are awarded based on the number of dogs in actual competition--the more dogs, the more points. However, the number of dogs required for points varies with the breed, sex and geographical location of the show. The AKC makes up a schedule of points each year to help equalize competition from breed to breed and area to area.

There are six regular classes in which dogs seeking points may compete. (Dogs that are competing for points are frequently referred to as class dogs).